Are You Ready for the Living Building Challenge? 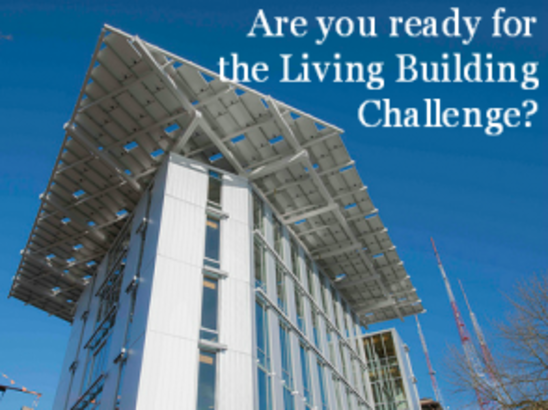 From 2011 to 2012, the volume of LEED certified federal building projects increased by more than 50 percent. Worldwide, more than 50,000 commercial & institution buildings have been certified as LEED compliant. Environmental stewardship has steadily grown in popularity since the LEED program began in 1993 and has become essential to the repertoire of any forward thinking engineer looking to advance. As of April 22, 2013, the bar has been raised thanks to the grand opening of Seattle’s Bullitt Center, a project which has been dubbed The World’s Greenest Office Building and will shine a more public light on the Living Building Challenge.

What is the Living Building Challenge?

The Living Building Challenge is an award issued by the International Living Future Institute – a green organization that advocates action around the globe – to any building project that is proven to have net zero energy & water consumption, a net zero waste output, and the absence of common yet toxic building materials from a materials Red List. Even after a building is officially opened, an entire year must pass before it can be designated as Living Building Challenge compliant. So, the Bullitt Center has a ways to go before earning the award but it is already off to a good start. Can the same be said about your next project?

Since the start of the Living Building Challenge in 2006, the fact that a handful of projects have earned this prestigious award is no small feat. From Hawaii to New York, innovative engineers have put the time & dedication into overcoming obstacles to reaching the goal of the Challenge. Though it may be a difficult process, there are substantial advances an engineer can make while diminishing our negative environmental impact.

Completing the Bullitt Center in Seattle was no walk in the park. “It was surprising how often you’d come across a product that may have some toxic component, but it was still being used because it was industry standard,” says Joe David, the Center’s project developer. The list of chemicals that Living Building Challenge bans are as follows:

Each chemical is a documented toxin that deleteriously affects the health of human beings. Some of the Red List Materials have already seen restrictions in one facet or another by the EPA (most notably with lead based paint & asbestos based insulation) yet many are still ubiquitous in homes, public, & commercial buildings, often in unexpected places. The Living Building Challenge encourages engineers, builders, & contractors to take a serious look at the chemicals they employ without question.

During the pursuit of the Living Building Challenge, the Bullitt Center’s team was opened up to the prevalence of harmful chemicals in mundane places. Most bronze or brass fixtures contain 4 to 6 percent lead. All wiring system types contain PVC, a cancer-causing dioxin, as an integral part of both their insulation & wiring jackets. Even concrete is often a cocktail of Red List chemicals (depending on the need & building environment). In fact, David was so surprised by the list of chemicals that he intends to publish a guideline for any future Living Building Challenge participant (more issues & solutions can be found here).

The act of eliminating these toxins required real outside the box thinking. Typical suppliers were out of the question and certain building processes even had to be avoided completely yet the team made incredible strides that can easily empower their future projects.

To address the lead plumbing issues, piping was only purchased from vendors in California & Vermont where new laws require lead free alternatives. The Bullitt Center now boasts ABC plastic in place of the PVC wiring standards. In the pursuit of clean concrete, they went through dozens of batches until a locally sourced product that was reliable and completely toxin free was found. Though the Challenge forced the Bullitt Center team to reject standard products, the process further refined their problem solving skills and opened them up to a number of new techniques. Ultimately, that capability will make them desirable to interested firms down the line.

A survey conducted by the Association of American Colleges & Universities corroborates that. The AACU found that 93% of employers believe a candidate’s demonstrated ability “to think critically […] and solve complex problems is more important than their undergraduate major.” So basically, if you can problem-solve and decode any challenge on the job, you can easily close skills gap, making yourself an incredible commodity.

Move to the forefront of the industry

The techniques being employed within these buildings to give them their net zero energy & water consumption are at the forefront of sustainable engineering. The Bullitt Center is 80 percent more energy efficient than any other metropolitan Seattle high rise. The building boasts advanced design layouts that maximize photovoltaic grids and exposes the building to higher levels of natural light.

Rainwater will be collected and eventually satisfy all of the water needs of the building’s sink, shower, & fire sprinkler systems. The building even sports the world’s first six-story composting toilet system that operates without using chemicals or giving the building a pungent smell. It truly breaks bounds and as more innovators attempt the challenge, we’ll see even more inventive solutions to combat old problems.

“It’s impossible to say that something is impossible if it exists,” says Dennis Hayes, founder of the Bullitt foundation. Take a chance on the Living Building Challenge and find out for yourself.