3D Printers Are Changing the Face of the Manufacturing Industry 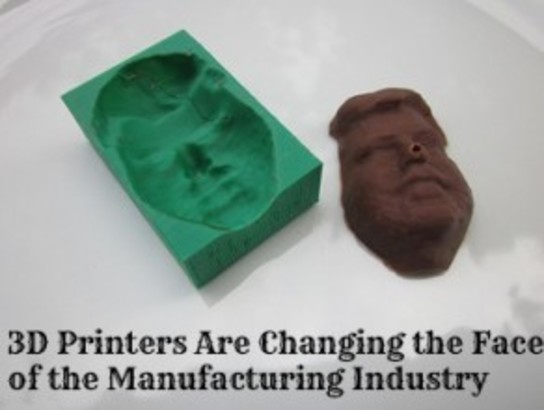 3D printers are making headlines all over the news, and multiple industries are already taking notice of and utilizing the potential of this new technology. The Manufacturing industry in particular is watching the rise of 3D printers with great interest.

No matter what type of product major companies are producing, there is something to be gained by the revolution of 3D printing, and decreasing costs have already made this technology available to consumers and businesses of all sizes. Although industrial 3D printers can cost upwards of $8000 the price has already begun to drop as the technology experiences further innovations. There was once a time when consumers couldn’t find a high definition television for under $3,000, today they can purchased for less than $200. 3D printers are already experiencing similar price reductions, and it now possible to purchase simpler models for about $500.

With drops in price and new innovations making production using 3D printers more efficient it is certain that changes can be expected in multiple industries.

The multiple branches of the manufacturing industry surely stand to gain, or lose, the most from 3D printing technology. Manufacturers now have a substantial bit of technological power behind their operations, which can hasten the speed of product life-cycles as well as drastically reduce the costs of overall production.

Rapid prototyping has also begun to leave a mark on the industry, as 3D models can now be created and tweaked to innovate and customize products for clients. Rapid prototyping allows users to scan items for reverse engineering, giving manufacturers the potential to innovate older products. When combined with 3D printing these technologies have added the diversity of limited releases and small orders to large scale mass manufacturers.

On the opposite end of the spectrum, bad news could be on the horizon for manufacturers and the working class. The rise of machines always has the potential to decrease the need for manpower, thus reducing the number of engineers and skilled workers needed to manufacture items.

With 3D printers also getting into the hands of the average person, prospective consumers will soon be able to cut out the middle man by manufacturing their own products. All a person will need are the plans and the materials for a particular product to manufacture it on their own. A person will not need a technical degree or skilled workers to piece everything together when their printer can produce it for them.

So the manufacturing industry and consumers could soon have the potential to print their own toys, electronics, and cars, but what about human organs?

Scientists have already begun experimenting with printing stem cells for research, which can potentially end the moral and religious controversy over the medical miracles. If this science really begins to pick up steam the potential would be limitless. Imagine being able to produce organ clones for cheap and effective transplants, new skin for reconstructive surgery, or pharmaceuticals.

On the more realistic end of the spectrum manufacturers in the healthcare industry are already testing the potential of printing personalized hip replacements, knee sockets, and artificial limbs for patients.

Can you imagine replacing your refrigerator, oven, and all other kitchen appliances with a 3D printer that produces food? Probably not, but the potential to feed masses with food manufactured by 3D printers is already on the rise.

Printers are already making edible objects made out of protein and other minerals, an idea that could lead to philanthropic outcomes. The benefits provided by this technology can be extended to homeless shelters, poor countries, and on the scientific side, feeding astronauts in space.

The Future of Manufacturing?

While still a budding technology, 3D printing has already begun to make waves in the manufacturing field. The implications of this technology will surely have a resounding effect in the industry, and manufacturers will definitely be keeping a close eye on it as more innovations are made.