Are Manufacturing Jobs Coming Back to the U.S.? 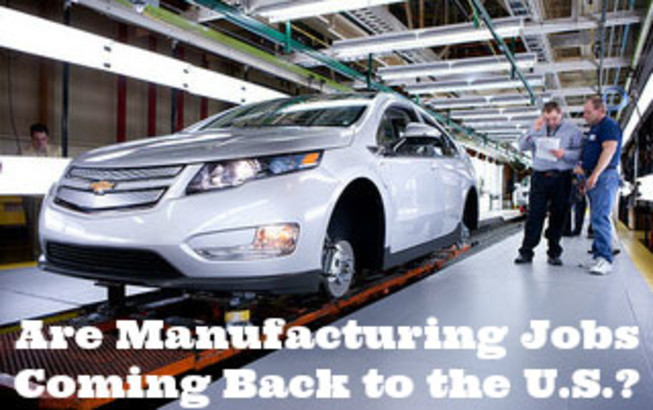 Between 2009 and 2012, 50,000 jobs returned to American soil after a time in facilities abroad. Just five years earlier, that number was reportedly much closer to zero. Though economists are looking at the same numbers, they are coming to drastically different conclusions. Some interpret these 50,000 jobs as a herald of the beginning of the end for the U.S. outsourcing trend while others view these jobs as a temporary return in a revolving cycle. What’s the real answer?

The End of Outsourcing?

Those who believe outsourcing will soon fall out of fashion refer to the diminishing advantages of outsourcing jobs to facilities in foreign nations. For this school of thought, the 50,000 added jobs indicate that companies like Ford, General Electric, Caterpillar, Apple, and others are realizing that the disparity between operational costs inside and outside of the United States is negligible at best. From prevailing market changes to overlooked costs, here are a few examples of the indicators they see.

• Wages in India & China are on the rise. During the heyday of manufacturing migration, Chinese workers earned about 58 cents per hour (about 20 times less than American workers). Now, Chinese wages have risen to just under half of American wages. According to Harold Sirkin, a partner with Boston Consulting Group which performed a recent study on Chinese wages, “People [in these countries] have options to go to other factories, and they do, which is why companies are forced to raise wages.”

• Fuel costs have drastically increased. Transporting manufactured goods has become exponentially more expense than it was a decade ago. Back in 2002, the price of a barrel of crude oil was $26.18. Last year, the price was $94.05. That is a 359% increase in just a decade. So, as the price of crude oil goes up, the price of transportation (via boat, plane, or airplane) goes up. Manufacturing then becomes a costly endeavor when you are transporting goods thousands of miles.

• Reliability & quality of foreign partners come into question. Recent accidents in foreign facilities (i.e. the Bangladesh garment factory) and the deplorable conditions in others have been brought to light and tarnished the reputation of major companies and their brands. In response, they may move operations to more trusted, regulated facilities (though that is to be seen).
A Temporary Shift?

Those who believe that this is simply a temporary bounce-back claim that the data just isn’t there. No one refutes the increase of some returning jobs but to them, the signifiers of sweeping change don’t add up.

• Lack of increased U.S. exports. With an influx of permanent manufacturing jobs on domestic soil, there should be an increase in exports due to the expanded workforce’s output. Right now the data doesn’t show that. Export growth models show that there has only bee moderate growth at best and much of that has even levelled off.

The Reality: A Balance Between the Two

Outsourcing will never truly vanish. Certain businesses will see the value of keeping a presence in locations across the globe and will find the savings to be worth any additional inconveniences. Others will bring some of their operations back to the U.S. to save money and increase their relationship with an American public.

Even when jobs are added, they will not be the manufacturing jobs of 20 years ago. Most will be highly automated, requiring a four year degree needed and a shrewd command of advanced IT equipment. So, there is still hope for American manufacturing but it will favor the tech-savvy when the time to apply comes around.