Can Engineers Save Detroit? 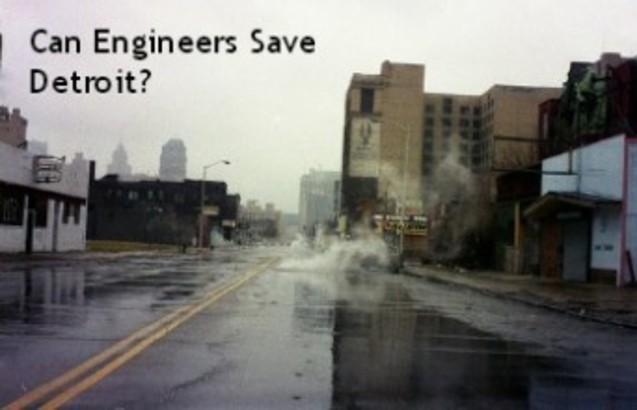 History and Human experience present three very distinct depictions of Detroit. The first is a window into the past, where the bustling post WWII city was the manufacturing capital of the world. Filled with 1.8 million residents, the city became a hub of automotive manufacturing, and promised prosperity to all who moved there.

Flash forward 60 years and you are left with a city that some Michiganders love, others fear, and the rest of the country lacks faith in. The Motor City has come to be known as the murder capital of the USA, and some compare it to a war zone. The crumbling infrastructure, high unemployment, and rampant crime have scared off investors and caused occupants to flee in record numbers, driving the population down to 700,000, the lowest it has been since the pre WWII era.

Some believe that, at this rate, the city will continue to descend into a void of investments and bankruptcy. But this future is not guaranteed, not if some ambitious designers have anything to do with it.
Imagine a Detroit twenty years from now. The streets are safe, it’s environmentally sustainable, and people journey there from all over to enjoy the majestic view of the Detroit River, surrounded by the revived ruins of a once decaying city. Sound farfetched? Perhaps it is, but this picture that some visionaries have painted to reinvigorate interest in turning around one of America’s once great cities.

A plan is being concocted by the United Auto Workers (UAW), which has teamed up with Bill Ford, the great-grandson of the late, great Henry Ford, to pave the way for investors and engineers to improve almost every facet of the city. From infrastructure to landscape to the ecology, everything will be revamped to create something even greater than its former glory.

Just as man did thousands of years ago, city planners propose to use the river and its branching creeks as a starting point to redevelop the thousands of acres of land that surround it. Rebuilding the surrounding streets, waterside paths, parks, and bridges located along the river will restore some beauty to the city, create jobs, and hopefully draw in more investors and businesses to breathe much needed life into the city.

In addition to city infrastructure projects, Ford and the UAW plan to turn Detroit into the leading city for green energy. They will create a hybrid city/agricultural environment that utilizes solar, wind, and biofuels to power its life-force. Urban farming will also become the norm, and as exporting produce and other locally grown goods takes off – thanks to its proximity to the river – money will flow to the city and drag it from the depths of its debt crisis.

Much goes into restoring a city. New York focused on cracking down on crime in the 1980’s to clean up Manhattan, and education activists maintain that schools are the key to eliminating poverty and saving our urban areas, but is that all that can be done to save Detroit. These plans are bold, and in no way do they guarantee success, but they do unearth an important question: can engineers save Detroit?

See more of the plans